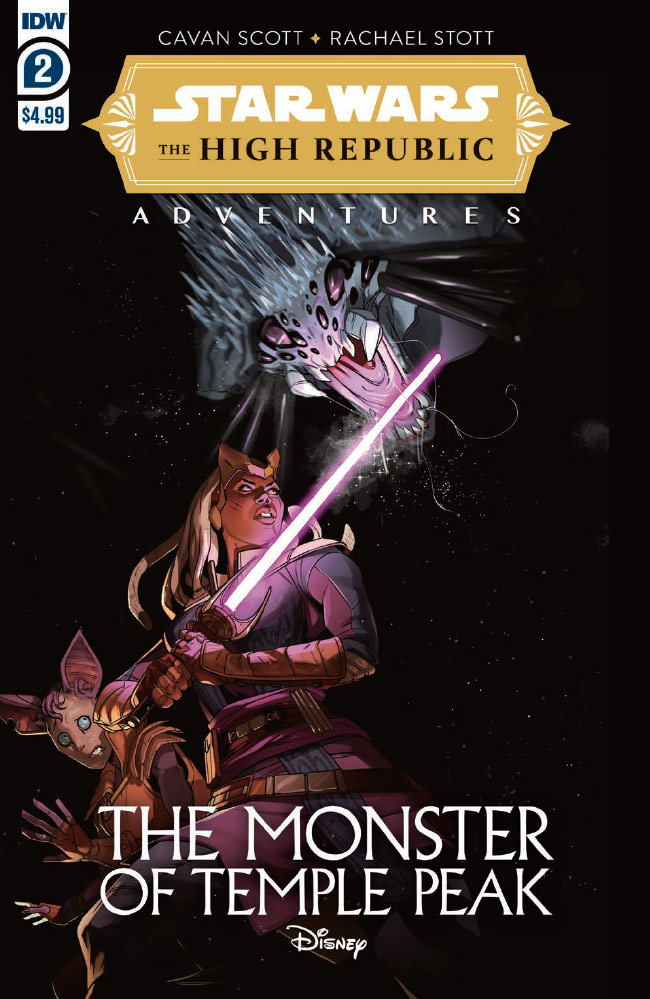 Ty begins the hike to Temple Peak, but the hungry mountain creatures and slippery edges put his rusty Force skills to the test.

Dangerous monsters, cliffs, and battles are second nature to Ty, however.

But dealing with people? Well, that might be the hardest part of his mission.

So what does an ancient Jedi do when confronted with a giant spider about to attack? She dodges, if she knows what’s good for her, and dodging is what kicks off the second issue of Star Wars: The High Republic Adventures – The Temple Peak Monster as the creature has a face. full of web to Ty Yorrick, temporarily blinding her and remembering the time she trained as she learned to bond with animals, which she tries out here, realizing there is another presence . As the failures of the Rock Weaver, Ty’s droid KL-03 informs him that the creature’s strap is sound sensitive and so Ty grabs his sonic knife, turns it to level 3 and points it at his face, removing the remains of the strap. Using the Sonic Cutter again, she detonates the webs of the person captured from the last issue. Invisible, the person runs away as Ty uses bolas to trip them up, revealing the Segredo she encountered in the last issue, hiding behind her natural ability to become invisible. Named Drewen, he reveals that he was following her because she is a Jedi, which she again denies. He wants to train, which Ty refuses to do and Drewen leaves, visibly agitated. Back on his mount Lyuna, they commune and Ty agrees to find Drewen as he descends from the mountain in the cold ice and snow.

Setting up camp for the night and watched over by the weaver, Drewen chats constantly much to Ty’s chagrin. He tells about the Great Disaster, and how he escaped but his brother perished. It was from his brother that he learned all he knows about the Jedi, and as he questions Ty, she reflects on his training, his non-Jedi powers and skills, and understanding the dark side. of the Yallow cultists she fell with. his fellow Jedi Klias. Inside the temple, they discover traps left by the Yallows and as we return to the present, she stops as Drewen insists she tell him more, about her history as a monster hunter. Ty isn’t in the mood to tell more stories, and Drewen pulls back just as Lyuna is frightened and runs away as the village girl suddenly attacks, jumping on Ty and grabbing a blaster to shoot her. above. The girl slips and falls, and Ty uses the Force to grab her as she thinks back to the past as Klias grabbed her, a memory that shocks her and we stare at an empty sky; the girl is gone.

The next day the sun rises and Drewen is ready to move, expecting Ty to tell him to leave, but instead, with their Lyuna gone, she allows him to stay and carry their supplies at the end of the chapter two. That’s another intriguing question as we delve into Ty’s past and why she’s so eager to forget about the Jedi and their teachings, despite Drewen’s obvious desire to learn more. As usual, Cavan Scott brings a tight, mobile narrative to life thanks to the excellent work of Rachael Stott, who also provides some stunning cover illustrations.

Trails are rewarding at Smith Rock State Park in Oregon